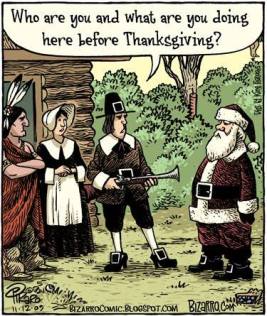 I got this comic as it cruised around Facebook. I just love the pie in the corner.

I have been meditating on this topic for some time. Pretty much since August when the first hints of merchandise hit the less visible store shelves, and my knee-jerk reaction was to throw ornaments at the stock-clerk. I’ve seen a social media post here or there about how it really doesn’t bother people.

“Commercialism has no effect on me!”

“Why not have one big holiday season that never really ends? It’s great!”

“It’s all the same, because all good things come from the same source.”

Perhaps it is because my natal day rests smack in the middle of the month of November that I feel a strange fidelity to Thanksgiving as a distinct entity. Or maybe I have a greater appreciation than many of my city dwelling friends for the blessing of the harvest. I am married to a farm boy. Perhaps I am just a Grinch at heart (you know, one that’s a few sizes too small). But the longer I ponder the more I believe it is my personal reverence for Christmas that leads me to shriek angry epithets at the giant candy canes that appear in the Target parking lot the day after Halloween.

You see I believe, whole heartedly, that familiarity breeds contempt, or at the very least, apathy. Human brains (especially adult brains) can only see the same stuff over and over again before they weed it out as white noise. Which means for me, all holiday decorations become white noise somewhere around November 20th. AND IT IS PISSING ME OFF BECAUSE I LOVE CHRISTMAS.

My adamance regarding the start of the season being solidly the day after Thanksgiving stems from a belief that the Christmas season is sacred. As the northern hemisphere darkens we look towards the light of Christ. We ponder the truth that like each of us he came into the world an innocent babe. Through miraculous and simultaneously humble circumstances he entered mortality. Yet unlike us, as he grew and learned he retained his innocence. He led a life of such goodness that all the universe became burdened with love for him. And that perfect love allowed him to break the bands of death, suffer for our transgressions, and then claim us as his own before the Father, that we might share in His glory.

The world cannot produce the preciousness of the Christ child. It cannot replicate the whisperings of the Holy Spirit that draw us nearer to our maker and teach us eternal truths. All the world can make is stuff that will eventually end up in a landfill. (Now envision Jim Carry’s green hairy face as he says, “You see what I’m saying here? In your garbage.”) And yet for some reason it is as if the corporate world thinks that they can copy/paste the trappings of a holy day enough times to make us think it is December 20th, and spend our dollars accordingly.

Yes we hang lights, we trim trees, we give gifts, but this should all be done with the meaning of each symbol in our minds and on our lips to our families and friends. That is not possible when “Grandma Got Run-over by a Reindeer” has been on the radio since November 1st. Keeping the season small forces us to keep it sacred. Minimizing the time we have for the trappings helps us prioritize.

By this point there are some (most) of you that are thinking that I am a total kill-joy. “What about Santa? What about Rudolph and Frosty cartoons? Can’t we at least sing Jingle Bells without you jumping down our throats?” I get it. I do. And I am all for children pouncing on their parents at 5am Christmas morning screaming Christmas carols and “look what Santa brought me!” But here’s the deal. Kids make their own magic, when the adults make meaning. When the grownups in their lives make things spiritual, their instinct is wide-eyed wonder. To me that is what Christmas is. It is viewing our Savior with the innocent astonishment of children who are understanding for the first time that angels, REAL ANGELS, appeared to shepherds who were just doing their jobs one night. Marveling that three men with the education and means to do and be whatever they wanted traveled hundreds of miles to lay extraordinary gifts at the feet of a toddler. To understand that the love of God was so powerful it called into existence a new star that shown so brightly it astonished the world.

Perhaps it is simply commentary on my own cynical nature. Maybe it is just me. But I want to be delighted when I hear the first crumby rendition of “Last Christmas I Gave You My Heart” come Black Friday on the radio, rather than roll my eyes in utter disgust when I stumble over it on Dia De Los Muertos. I want to step into the season of wonder deliberately. Not have it pushed at me by someone else’s retail schedule. And more than that I want my kids to know, this time, this month is different. This one is special. It’s not like the other times before. And that can’t happen if the season never really starts because for Walmart it never really ended.

I sincerely hope this rant hasn’t dampened anyone’s spirit. I only hope that it will cause you to pause and reflect on what having a season of Christmas means to you. Now you know what it means to me.

I wish all of you an excellent Thanksgiving: full of foods we tolerate for traditions sake (turkey is always dry, always. I will be roasting a chicken instead), awkward family conversations (“Indians should be glad we let them sell their jewelry on the side of the highway in AZ”- actual quote from a relative one year), and of course gratitude for the abundance that surrounds us in the USofA. And then I hope as I post about the holiday traditions and trimmings of my own life in the coming weeks you find them uplifting, fun, and full of Christmas magic in the heart of a very special season.