Quick Review: 3 stars I have a mass of mixed feelings. I don’t like most of the attempts to modernize a story so classic without bringing it into the modern era. I like Meryl Streep as Aunt March, surprisingly, but I can never quite forget that she’s Meryl Streep. And I enjoyed Saoirse Ronan as Jo much more than I expected to. And I really like that Grandfather Laurence becomes a fixture of the family rather than being the aloof old man next door. But there was a ton I had issue with. Overall, it was okay, but I don’t think I will bring my girls to see it in the theaters. 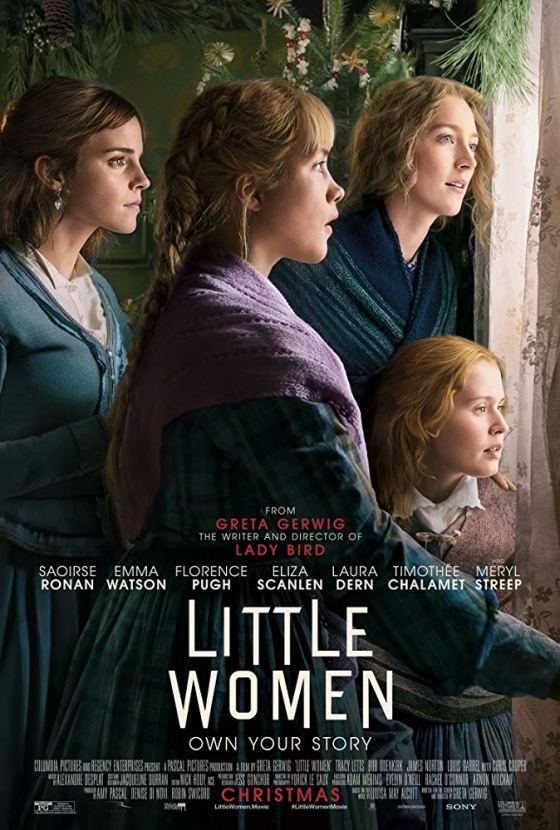 Longer review: It is always easier to throw rocks at the side of the barn than it is to build the barn in the first place. So I will begin with what I enjoyed about it.

I loved the way they show how hard it was for Meg (Emma Watson) to live poor, while still showing her love for her husband. I like that they validate her choices and give voice to what I think many modern women feel; our choices to be stay at home moms, to build homes rather than corporate empires are as valid, needed, and ought to be as valued by society. There is another moment, partially in the trailer, where Jo is railing against the notion that a woman’s only place is to love, but in the film she goes on to say that she is so lonely. And I think this too speaks to the modern feeling that women who take on the world are relegated to only their professional status, rather than being seen as people who also need connection and companionship. I wish more people today, men and women alike, would prioritize their families and their connections to others—in person, not only online— as it would make for a better world overall. Too many of us make terrible little decisions every day because we feel alone and lonely, rather than reaching out to those in our lives with love and service.

I really enjoyed, as mentioned above, that Grandpa Laurence really becomes grandpa to the family. Showing his generous, compassionate nature and then his devastation of losing Beth as he lost his daughter, makes him much more three dimensional and a real delight to watch. The other blending into the family I loved was Frederick’s family dinner and then his playing the piano. It shows how seamlessly he merges with the Marches, how he truly belongs with Jo in the life she’s chosen. It also heals the ache of losing Beth as he plays the instrument she loved so well, bringing her dream that they would all be together to fruition.

I liked Laura Dern as Marmie (mostly because I love Laura Dern), but there were several choices made about her character that got in the way of her fully becoming Marmie. The costumes were super fun, though not true to time in most respects (like much of the movie). Beth was so sweet. She was one of the few casting choices I can affirm with enthusiasm. I liked the choice to jump back and forth between Jo’s modern life and the past, but I don’t think they always did that well enough.

In fact, there were two other choices that made the decision to present much of the movie as flashback work against the film. One was to have Amy and Beth be played by the same actresses as both children and adults. There is not nearly enough growth (character wise or physically) between Amy as a child and her as an adult. She doesn’t quite look like an adult while sounding too grown up (she has a deep voice) in her childhood scenes, and then she’s too round-faced and facile to be an elegant woman as an adult. There is supposed to be a real difference in age between Meg and Jo–the elder sisters– and the younger two. This makes it very hard, particularly in the “Beth is sick” section to discern between past and present. If that was intentional it weakens the intensity of Jo’s need for Beth to get well and live as an adult to sooth her own sense of alone-ness. If that wasn’t what was intended, then it just muddles the two time frames: Beth recovering from scarlet fever and her later failing heart. The second choice that makes flashback work against the film is the emphasis of Jo’s career arc over her personal arc and the relationship she builds with Frederick. There is not nearly enough time to show the deep connection they build, the back and forth they really have over her writing, and the way he sees her. Instead they have Jo blow up at him over her stories and then disappear to Concord to nurse Beth. He is gone for 70%+ of the movie. He builds more of a relationship with the family in the visit sequence than he really does with Jo. (Oh, wait, just realized that a third choice—having the characters talk over each other like ‘real conversation’— only added to the confusion and buried cherished lines from the book amongst other people’s outcries.)

Speaking of relationships: I don’t like the implication of intimacy after Meg’s wedding. I don’t like the attempt to build connection between Laurie and Amy with him undoing her outer pinafore while they are in Europe. Physical intimacy is a cheap way to build a relationship, especially when such would have been a very private matter in that day and age. I never, NEVER believe Laurie’s affection for Amy. There is a certain chemistry between him and Jo, but never Amy. Their love is awkward and the story even pokes holes in whether or not it is sincere when a jealous Laurie starts asking “Who is this guy?” when Frederick shows up. It also doesn’t help that Professor Bhaer is a taller, manlier version of puny Teddy. With every rereading of the novel, every rewatch of the Winona Rider version, it kills me that Jo and Laurie don’t end up together. This time, I could not care less because Timothee Chalamet IS NOT THEODORE LAURENCE. Not even a little. He is a boy, in the most pejorative context imaginable. He might have been a decent cast as the boy Jo meets at the party she doesn’t want to attend with Meg, but then they needed to cast a man to usurp him at the wedding and in Europe.

The other fatal flaw for this movie is it’s preachiness, without any emphasis on personal improvement. Growing character, becoming a better person, was a huge part of Alcott’s original story. This is ditched in favor of an ongoing lecture of what it means to be ‘woke.’ There are moments where the ‘moral’ of the moment in stated outright, just in case the audience is too stupid to understand what the writer/director is trying to say. (There are also moments where the characters state their emotions, motivations, and intentions again just to make sure the audience gets what’s going on) I HATE the “ashamed of my country” bit. It’s point is that nothing about the way people thought and lived in the Civil War era was right, and that the north was just as culpable for the slave trade it fought to end as the south who fought to protect it, to which I call bullshorts. It is the most obvious virtue signaling, particularly because the black character who delivers the statement has no other role in the story. She may as well be credited as “black lady we needed to make a point” because she features nowhere else in the film.

I guess my overall feeling is that Little Women is just the latest casualty in the war on self reliance, personal responsibility, and any expression of affirmation for the classics as they are. Reimagining Dickens, Alcott, the Brontes, Shakespeare, and others with a modern sensibility isn’t a bad thing as long as you bite the bullet and go all in, ala Austen’s ‘Emma’ becoming ‘Clueless.’ It then stands on its own and can be judged on it’s own terms. Forcing modern standards and expectations onto the past does the past and the artists that were creating in that context does them and those working with them a massive disservice (I’m looking at you Fox’s latest Christmas Carol implosion). We ruin their work when we force our own morals onto their time and place. You wanna say that the way they were thinking was out of whack, bring it all into the modern day and give it the full modern treatment to make something truly new.

So my overall recommendation: skip the theatrical release, catch it on Netflix or Prime, and take a healthy dose of salt with you while watching. At the same time, try to enjoy the bits that were nice, like Louis Garrel’s smile.

Until next time, enjoy the show.