If you are not a fan of Avi Kaplan‘s, please go to wherever it is you like to find music and take a listen or two. Go ahead, I’ll wait.

Now that you have listened and you are a fan, because there is no other conclusion to which you could possibly come, (I kid, different strokes for different folks, I get it. But I think you would be hard pressed not to at least admit that he has an amazing voice and choice lyrics) we can talk about the experience I had and all the feels thereof.

First, the venue. The Musical Instrument Museum of Phoenix, or the MIM as it is known has a delightfully intimate theater of 300 seats. The acoustics, as one might expect of a music focused venue are rich and even, nearly perfect. There is not a bad seat in that house.

The hubby and I were about halfway up, far right side of the house and I could see the details of Mr. Kaplan’s facial hair. Practical upshot of such a close house, there is no where for bad vocals to go, or arrhythmic mishaps to disappear. I have been to more than one large venue concert where I could tell that a fair bit of the “awesome” coming form the stage, was really a conjured illusion of noise on noise from the masses and the reverberation of the speakers.

Live music is a tricky beast. Not every song lends itself to the stage. You have to have a memorized repertoire that you can, not only perform in the perfect setting of a recording studio, but in a variety of venues. Some audiences will be cooly sedate, others rowdy. A frog in the throat or a misbehaving piece of equipment is just par for the course and must be worked with or around in the moment, lest you have a mob of unhappy customers. The people staring back at you may be fans, supporting your efforts, but they are also customers who expect to get their money’s worth that night. Taking all of this into account is what makes concerts the proving ground of any musician. If you can play the stage, in tune, in time, and with a sense of the audience in mind- and the music has to be worth coming for to begin with- then you are an artist.

Avi Kaplan is one such. 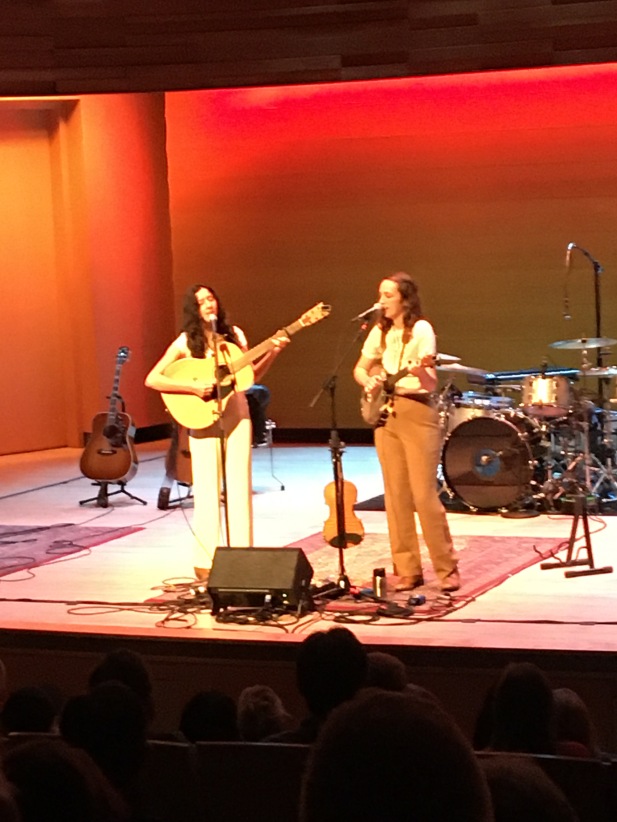 They are a cute little duo, currently out of Nashville, performing original pieces in the Blue grass, Spoke, Appalachian style, with the occasional modern twist. They were lovely. And in a genre where there is such a wealth of cover material, to hear them playing their own work was a welcome breeze. That being said, sometimes a song needs a line refrained here and there, but I find whole songs built on a repeated stanza structure boring. I want more lyrics, not the same lyrics over and over for nothing more than time filler. Repetition for emphasis in the right place = art. Repetition as a way to move through the melody without a lot of substance= lazy song writing. Fortunately, that only happened once. Wilhelmina Frankzerda’s soprano voice moved me to tears during “Troubled Soul” and her fiddle playing during Avi’s set was more than competent. Emily Mann’s alto was ever so slightly flat a time or two, but as lady banjo players are few and far, her skill was refreshing. I see a great deal of potential and passion in these two young ladies and I hope they will continue to grow as musicians. They were a great pick to warm up the audience, and their collaborative moments with Avi’s band were a delight.

Avi Kaplan’s lyrics are deceptively simple, and often innovative. Comparing the depth of one’s love to a natural phenomenon is not new, but, “deeper than the canyon low,” isn’t what most would expect. I often find myself surprised and then saying, “Oh, of course,” in response to the turn of his phrase. And Kaplan has a way of making the music just as expressive and evocative of his theme, while also using it as a counterpoint, as each individual song requires.

Take one of my favorites, “It Knows Me,” for example. The vulnerability of the lyrics combined with the hopeful whistling (which he does himself LIVE y’all!!!) prods the listener not to a bunch of self-indulgent naval gazing, but to a self-realized, forward thinking movement into a brighter future. And Kaplan provides perfect prescriptive clap-along directions. The pace and the sincerity together make you feel like not only does Kaplan wrestle with his own shadows, but he judges no one else for wrestling with theirs. 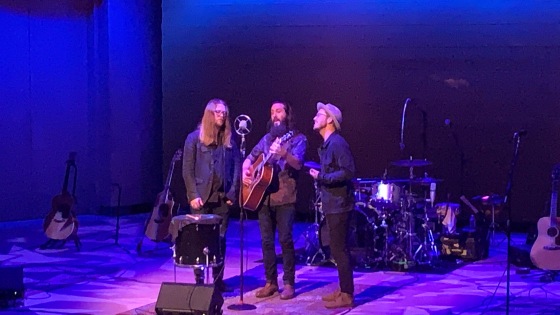 Kaplan’s performance of “Otherside” was a near religious experience. The spare instrumentation: One mic (an old school piece I think the museum might have furnished?), guitar only, combined with the vocals of his guitarist, Kaleb, and his drummer, Noah, created an almost fragile audiological experience. I found myself, eyes closed, mouthing the words like a prayer as Avi’s voice washed over me. Every cleared throat and crumpled paper felt like a sacrilege, that only months of mindfulness training allowed me to dismiss. The video recording my husband took is now a treasured possession that I will be backing up in all the places to insure it is one of the last things I hear before exiting this life.

I often take the diversity of a crowd to indicate the excellence of the music. When people who might be uncomfortable in conversation, perhaps even proximity to one another, can gather peaceably to support an artist, then you know it’s gonna be good. When you show up to a concert and you feel like you are “the only one,” then it’s possible you are about to hear some lack luster nonsense that has pandered to a particular crowd by someone who can’t sustain attention with their vocals and thus will be creating a glitzy, overdone visual experience to distract from their lack of talent. Avi’s crowd runs the gamut, because all kinds of people can recognize true talent when they hear it.

But I was surprised by the seeming lethargy of my fellow concert goers. Many sat, like happy statues just soaking in Avi’s excellent tunes. I could not help but move and sing. When Avi announced his last song, many groaned. I didn’t. I told my husband before the show, “He won’t end the show without doing ‘House of the Rising Sun’ and ‘Change on the Rise.'” He hadn’t done either yet, so I just smiled, knowing the best was yet to come. After their “last” song, the stoic crowd was on its feet. I didn’t realize that only three hundred people could make so much noise.

I flatter myself, though I’m sure I wasn’t alone, that I started the chant, “Avi! Avi!” that drew the band back out to finish the night. I think I grabbed my husband’s arm and shook it violently, gesticulating wildly toward the stage like a child encountering Mickey as Disneyland, as he started in on “House of the Rising Sun.” After that, I refused to sit with the rest of the oh so polite patrons. I knew that there was only one way to show the respect I had for the power of his last number, and that was on my feet singing at the top of my lungs, stage side. I loved it.

We had to beat the crowds out of the parking lot, with a babysitter to rescue from our brood, and over an hour’s drive home. The only improvement on the night I can imagine would be to shake his hand, and his band’s, and say the only thing one artist can say to another, “Thank you.”

So if you, Mr. Kaplan, have found your way here (come on, Google alerts!), please let me say, “Thank you.”

We have been fans since the days of Pentatonix. No shade thrown, we are still fans, but it became obvious to us when you left that we had been fans of them because of you. Thank you for having the courage to step away from the identity you were handed, one that could have been lucrative in the future, to reconnect with yourself. Thank you for sharing that self with the world, even in the evolutionary period of “Avi and the Sequoias.” It gave us hope that there would be more of you in the future. Thank you for “Otherside” and “It Knows Me” and ‘I’ll Get By.” They’ve meant more to us than you can ever know. Thank you for giving us music we love to sing with our children. When we explained that we got to hear you sing “Change on the Rise” last night, they gaped and wanted to know why we hadn’t taken them, too.

Most of all, thank you for being human and for being an artist. The world would be a bleaker place without your voice.

I aspire to write with the same power and emotional evocation.