Quick Review: 4.5/5 stars. Throw Dev Patel, Tilda Swinton, Hugh Laurie, Benedict Wong, and a trove of other delightful actors into Charles Dickens’ top hat, shake them about a bit, and drop them in a diversified version of mid 1800’s England and you will have an approximation of what a romp this movie is. Go see it. It will be, I suspect, a perfectly light repast for these troubled times. 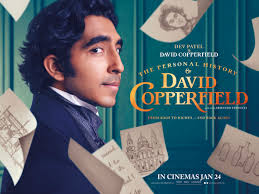 Longer review: I love a good retelling of a classic, especially when it is true to the themes and intent of the original. No “Netflixing,” if you please. No, this a bright brocade covered good time of a film. And you don’t have to worry about any stupid gratuitous nonsense being added, as has been the case for many a lovely tale turned “modern.”

Nope, from beginning to end this was a showcase of what a delight Dickens can be when you don’t have to slog through his writing. He is far too longwinded for most contemporary readers (though I enjoy his style), who expect brevity and a plot that moves apace with our modern world. But when you put all the auxiliary observations and redundant rambling aside, and put his characters up on the screen, something inherently charming and touching almost always takes place.

Jairaj Varsani, who plays young David, absolutely steals the show. He is the sort of wonder-filled, high spirited innocence to his acting that makes him a joy to watch. You wish you could join in the games of tag in Yarmouth and it breaks your heart to see him exiled to the bottling factory in London. His performance alone is worth the price of admission.

Dev Patel is always a delight, and I keep thinking that he will mellow in style as he ages, but he never ceases to bring an almost over the top physicality to his performances. You are never quite sure where his hands might fling and I often expect the blooper reels of his work to be full of shots of him accidentally hitting his fellow actors. But they don’t. The kind of manic presence he can bring marry’s perfectly with the anxiety of a suddenly penniless, older David, who must employ the evasive tactics learned in youth to keep away from creditors of his own.

The one note of warning I must give is of some over the top corniness in the middle of the movie. If you have a visceral reaction to social awkwardness like I do, then you might want to close your eyes and hum to yourself for a minute or so: once when Mr. Micawber, played by Peter Capaldi, tries to pass himself off as a professor at David’s school, and then during the montage of seeing Dora Spenlow everywhere. That latter isn’t awkward, just very silly. Which I guess is how we are meant to perceive the relationship.

Tilda Swinton and Hugh Laurie make the perfect Ms. Trotwood and Mr. Dick. They play off one another seamlessly, and I think really embody the characters as they were written. But then, I’m always on board for Hugh Laurie in period dress so make of that what you will.

The other thing I appreciated was that the diversity of the cast is never remarked upon. There’s no inserting horrible racism on the part of Mr. Murdstone, he’s just a horrible person as he is in the books. There’s no heavy handed preaching about the need for inclusion, inclusion is just present. There’s no implication that David’s race is an issue to him and Miss Spenlow getting married; it’s just the issue of money and incompatibility just like the book.

Imagine! A retelling and reframing of a delightful classic that updates it without destroying it. All the themes and characters are still there, and nothing unnecessary is added (FX channel’s A Christmas Carol, I’m looking at you!). It is absolutely adaptation done right.

The costumes are such fun, the dialogue is as winning as when it was written even as it is  changed.

Go see this one. It will lighten your heart.

Until next time, enjoy the show! 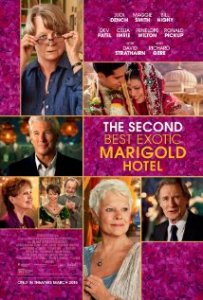 Quick review: 4.25 stars, Super freaking adorable. Go see it with someone who likes to laugh.

And now for spoilers.

This movie manages to add more romance and be less about sex than the first. WHICH. I. Love!! Way too often in our cultures offerings we are given the choice between no romance at all or an eye-rolling lust fest. But Second-Best does the favor of assuming its audience’s intelligence and implies rather than shows. Moreover, it gets into the emotional complexities of relationships at any age.

No one actually dies this time. But the shadow of Maggie Smith’s impending departure hangs over much of the film, and then is poignantly and tear-jerkingly wrapped up in a letter written to Dev Patel’s character Sonny and his fiancé Sunaina. They are leaving for their honeymoon after a series of disastrous pre-wedding parties and half a dozen or so of Sonny’s screw-ups, and Mrs. Donnelly says a final goodbye. We don’t see her pass, but the feeling is certainly that she will not be there when they get back.

The not-quite-budding relationship between Norman and Evelyn played by Bill Nighy and Judi Dench (who is seriously just lovely) is perfectly frustrating and simultaneously delightful. And the random appearance of everyone’s least favorite ball of negativity, Norman’s wife, adds to the hilarity and gives Evelyn a chance to show her backbone.

It was, I think, just as good as the first. Which is very hard to do in a sequel. And since there was the addition of some bollywood style dancing at the wedding, it managed to be the same and different. Can’t wait until it comes out on video.